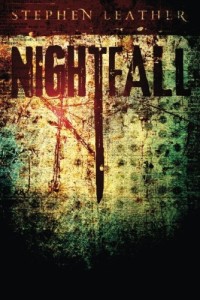 Uttered by the abusive father of a nine-year-old girl, that phrase ended Jack’s career as a police negotiator and has been haunting him ever since. Now that he is a struggling private detective, those words return with a vengeance when he inherits a mansion – and some terrifying information. Apparently Jack’s soul was sold at birth, and a devil will come to claim it on his thirty-third birthday just weeks away. It’s a hard pill to swallow, given that Jack doesn’t believe in hell (heaven, either).

But when people close to him start to die, he is forced to consider that real evil may be at work, and if he doesn’t find a way out, he’ll be damned to hell for eternity. Brooding intensity, unrelenting suspense, and surprising wit fill the pages of Nightfall, the first installment of Stephen Leather’s mesmerizing trilogy.