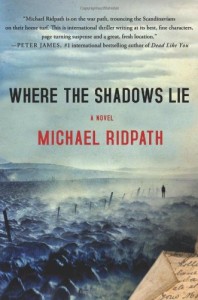 Book Number 1 in the Fire and Ice Series.

Amid Iceland’s wild, volcanic landscape, rumours swirl of an ancient manuscript containing a long-lost saga about a ring of terrible power. The manuscript, which is believed to have inspired Tolkein’s Lord of the Rings, exists…but why is it worth killing for? Untangling murder from myth is Iceland-born, Boston-raised homicide detective Magnus Jonson. Seconded to the Icelandic Police Force for his own protection after he runs afoul of a drug cartel back in Boston, Magnus also has his own reasons for returning to the country of his birth for the first time in nearly two decades – to investigate the unsolved murder of his father.

Binding Iceland’s landscape and history, secrets and superstitions in a strikingly original plot that will span several volumes, Where the Shadows Lie is a thrilling new series from an established master.