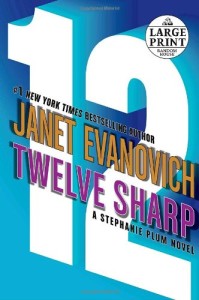 America’s favorite bounty hunter, Stephanie Plum, is back in her twelfth bestseller and sure to win more fans than ever before. Trenton, New Jersey’s premier troublemaker is once again struggling with her tangled love life, her chaotic family, and her gift for destroying every car she drives.

Not to mention her attempts to bring in the sometimes scary bail jumpers of Trenton, and the sudden appearance of a mysterious female stalker—who turns out to have a close connection to Ranger. Twelve Sharp has twists that will drive readers wild and prove that once again, for sheer reading entertainment, no one tops Janet Evanovich.

This book is in the following genres: Crime, Humor, Mystery, Romance