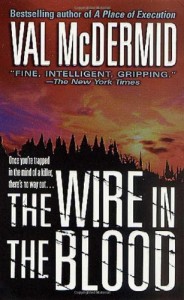 The Wire in the Blood

Book Number 2 in the Hill and Jordan Series.

Taut, suspenseful and ferociously readable thriller featuring psychological profiler Dr Tony Hill. ‘A terrific chiller from Manchester’s answer to Thomas Harris’ Guardian Nobody moves around inside the messy heads of serial killers like Dr Tony Hill. Now heading up the recently founded National Profiling Task Force, he sets his team an exercise: they are given the details of thirty missing teenagers and asked to use their new techniques to discover whether there is a sinister link between any of the cases. Only one officer, Shaz Bowman, comes up with a concrete theory, but it is ridiculed by the rest of the group until someone murders and mutilates one of their number.

Could Bowman’s outrageous suspicion possibly be true? For Tony Hill, the murder of a member of his team becomes a matter for personal revenge. Aided by his previous colleague, Carol Jordan, he embarks upon a campaign of psychological terrorism — a game of cat and mouse where the roles of hunter and hunted are all too easily reversed.

This book is in the following genres: Crime, Horror, Suspense, Thriller