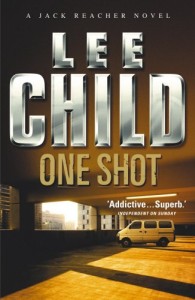 A lone gunman unleashes pandemonium when he shoots into a crowd of people in a public plaza in Indiana. Five people are killed in cold blood, shot through the head. But he leaves a perfect trail of evidence behind him, and soon the local police chief tracks him down. After his arrest, the shooter’s only words are, ‘Get Jack Reacher for me.’ What could possibly connect this psychopath and the wandering dropout ex army cop?