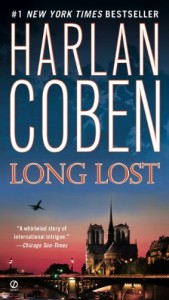 Myron is summoned to Paris at the behest of an old lover, Therese. She is in unspecified trouble and needs his help. When he gets there, he discovers that her ex-husband has been murdered and she is the main suspect. The interesting thing is that more than one blood-type has been discovered at the scene – and the other blood can only be attributed to the dead man’s daughter. But she died 10 years before.

So far, so Harlan. But there is a twist on his usual twists! Did the daughter really die? Did Therese’s husband have a further child with someone else? All those are covered, but when the truth is actually revealed we suddenly reach a stunning new level, on par with Robert Ludlum.