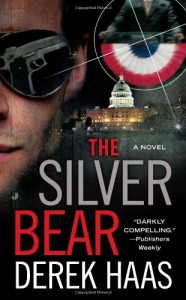 “The intense psychological portrait of a hitman–the anti-Jason Bourne–as he stalks his prey from Boston to LA. He wants you to know him, maybe even admire him, but only for his excellence in his craft. Perhaps he was even born for it. “”A natural killer,”” his mentor–a middleman named Vespucci–said he was. He proved it with his first professional hit: a Fifth Circuit Court judge in Boston, executed with a sheet of Saran Wrap in the stairwell of her own courthouse. He’s proved his merit often, usually with a Glock semiautomatic, but he’s improvised too, with his bare hands, the heel of a shoe, knives, even a sewing machine.

He is the consummate assassin, at the top of his form, immune to the psychological strains of his chosen profession. He is what the Russians call a Silver Bear. He calls himself Columbus. It’s the name Vespucci gave him, ten years ago, when he discovered a dark, new world of fences, clients, marks, jobs, jack. Not that his real name meant much to him anyway. He never knew his father or his mother, a prostitute who became dangerously involved back in the seventies with an earnest young congressman named Abe Mann, then a rising star in the Democratic Party.

The magnetic Abe Mann has since become the Speaker of the House. He is currently running for the Democratic nomination in an exhausting presidential campaign, weaving his way across the country. Columbus is not far behind. But as he pieces together his past and prepares the seamless assassination of his mark, the criminal underworld he has always ruled begins unraveling violently around him.”