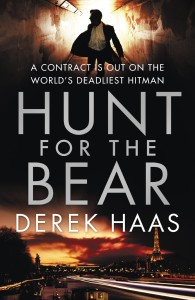 Columbus (Hunt for the Bear)

Columbus is back and as deadly as ever. But the hunter has now become the hunted, in this sequel to the national bestseller The Silver Bear. Recouping in Europe after loosing his fence and best friend during his mission to assassinate his father, Columbus now finds his reverie interrupted by multiple assassins searching for the elusive Silver Bear. As Columbus eliminates each killer, more and more appear – a hydra effect he can only eliminate by finding the origin of the hit, a source connected to his own past. Racing across the globe, as both hunter and hunted, Columbus’ travels take him to Italy, where he meets a mysterious woman named Risina. A woman with her own secret past, she may be Columbus’ only hope of salvation.