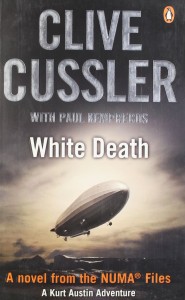 Critics and fans everywhere have welcomed the enormously entertaining new series from Clive Cussler: the adventures of Kurt Austin, taken from the NUMA(r) Files. Hailed as a hero for the new millennium, Austin is the leader of NUMA(r)’s Special Assignments Team-and the threat before him now is definitely special. A confrontation between a radical environmentalist group and a Danish cruiser has forced Austin and colleague Joe Zavala to come to the rescue of a shipful of trapped men; but when the two of them investigate further, they discover that something far more sinister is at work.

A shadowy multinational corporation is attempting to wrest control of the very seas themselves-no matter what havoc results-and is killing anyone who attempts to stop them. When Austin’s boat blows up and he just barely survives, it seems certain he is the next in line to die-but he cannot stop now. For the environmental disaster has already begun, and only he and NUMA(r) stand in the way. . . .

Rich with all the hair-raising adventure and endless imagination unique to Cussler, White Death is an exceptional thriller from the grand master of adventure fiction.