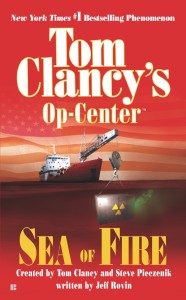 Book Number 10 in the Op-Center Series.

A half-dead Singapore pirate is plucked from the Celebes Sea in the Western Pacific, setting off alarms halfway around the world in Washington DC. Traces of radiation are found on the man, causing Australian officials to call in Op-Centre for a top-secret investigation of nuclear disposal sights. When an empty drum from a recent drop-off is discovered near where the pirate’s ship was destroyed, the Op-Centre team comes to a terrifying conclusion: a multi-national corporation that has been hired to dispose of nuclear waste is selling it instead – to a most unlikely terrorist.