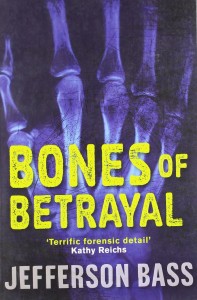 The first three Body Farm novels – Carved in Bone, Flesh and Bone, and The Devil’s Bones – took readers deep into the backwoods of East Tennessee, where fascinating forensic science mixed with extraordinary characters, including the Farm’s charismatic founder. Now, in the latest installment of the New York Times bestselling series Kathy Reichs calls “the real deal,” truth, lies, war, and history intertwine in a story that reaches new heights of suspense. This is Jefferson Bass’s most ambitious and enthralling book yet. Bones of Betrayal

Dr. Bill Brockton is in the middle of a nuclear-terrorism disaster drill when he receives an urgent call from the nearby town of Oak Ridge – better known as Atomic City, home of the Bomb, and the key site for the Manhattan Project during World War II. Although more than sixty years have passed, could repercussions from that dangerous time still be felt today?

With his graduate assistant Miranda Lovelady, Brockton hastens to the death scene, where they find a body frozen facedown in a swimming pool behind a historic, crumbling hotel. The forensic detectives identify the victim as Dr. Leonard Novak, a renowned physicist and designer of a plutonium reactor integral to the Manhattan Project. They also discover that he didn’t drown: he died from a searing dose of radioactivity.

As that same peril threatens the medical examiner and even Miranda, Brockton enlists the help of a beautiful, enigmatic librarian to peel back the layers of Novak’s life to the secret at its core. The physicist’s house and personal life yield few clues beyond a faded roll of undeveloped film, but everything changes when Brockton chances upon Novak’s ninety-year-old ex-wife, Beatrice. Charming and utterly unreliable, she takes him on a trip back into Oak Ridge’s wartime past, deep into the shadows of the nuclear race where things were not quite as they seemed.

As Beatrice drifts between lucidity and dementia, Brockton wonders if her stories are fact or fancy, history or myth. But he knows one thing – that she holds the key to a mystery that is becoming increasingly labyrinthine. For as the radiation count steadily rises, and the race to find the truth intensifies, the old woman’s tales hint at something far darker and more complex than the forensic anthropologist himself could have ever imagined.