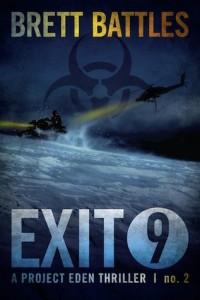 From thriller and suspense master Brett Battles comes Exit 9, the second book in the Project Eden thriller series. Before, it was just a test, a little demonstration to see if the virus worked. It did, and so much better than its creators could have ever hoped. But the testing phase is over. It’s time for Project Eden to take the next step. If its members have their way, humanity is about to get a reboot.

It’s up to Daniel Ash and the others in the outnumbered resistance to keep the Project from severely downsizing mankind. But can their small force succeed in the face of a plan decades in the making? The human race had better hope so, because if Ash and his friends can’t.

This book is in the following genres: Biotech, Horror, Thriller