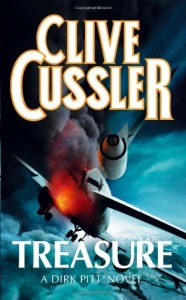 In 391 a fanatical Christian emperor orders the destruction of the great library and museum at Alexandria. Secretly the most precious items are removed and hidden until 1991 when a UN plane is brought down in Greenland by a terrorist conspiracy and Dirk Pitt is caught up in a web of intrigue. Clive Cussler is also the author of “Raise the Titanic!”, “Vixen 03″, “Night Probe!” and “Cyclops” among others.