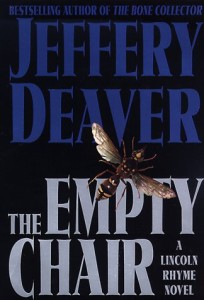 The Empty Chair is the third – or, if you count a guest appearance in the millennial thriller The Devil’s Teardrop, the fourth – novel to feature Lincoln Rhyme, the irascible forensic genius who became a quadriplegic when a cave-in at a crime scene damaged his spinal cord beyond repair. The series began in 1997 with The Bone Collector, which was recently made into a so-so film starring Denzel Washington. Every Rhyme novel to date has been characterized by authentic forensic detail and wild, even extravagant plotting, and the latest entry is no exception. The Empty Chair may, in fact, be the single trickiest suspense novel published so far this year. Unlike earlier volumes, The Empty Chair takes place outside of New York City in the bucolic but sinister environs of Paquenoke County, North Carolina. Rhyme – accompanied by his long-suffering physical therapist, Thom, and his beloved forensic assistant, Amelia Sachs – has just been accepted as a patient at the Medical Center of the University of North Carolina, where he is scheduled to undergo an experimental procedure that might increase the range of his mobility but might, on the other hand, result in his death. Shortly after his arrival, Lincoln’s plans are disrupted by an unforeseen emergency. Jim Bell, Paquenoke County sheriff, has trouble on his hands and needs Lincoln’s expertise.

According to Bell, a disturbed teenager – known, for reasons that become graphically clear, as the Insect Boy – has murdered a local football hero and abductedtwoyoung women. Convinced that the women have only hours to live, Bell asks Lincoln to examine the trace evidence found at the abduction site in the faint hope of pinpointing the kidnapper’s location. Though he knows nothing about the physical composition of the surrounding area – he and Sachs, as he repeatedly comments, are “fish out of water” in the American South – Rhyme agrees to help. Once again using Amelia Sachs as his eyes and legs, he sets up an ad hoc forensic lab in a borrowed corner of the local Sheriff’s office and goes to work.
This sort of scenario – a crazed killer, a race against time, a scattered handful of clues – offers more than enough drama to fuel any number of traditional suspense novels. In The Empty Chair, however, this same scenario is merely the first level of a complex, multitiered mystery that constantly confounds our most fundamental expectations. The first indication that The Empty Chair contains unexpected depths comes when Lincoln, flawlessly interpreting his disparate bits of evidence, locates both the Insect Boy (Garrett Hanlon) and his most recent victim (an oncology nurse named Lydia Johannsen) within the first 150 pages. At that point, Deaver throws away the rulebook.

After talking with Garrett Hanlon in the Paquenoke County jail, Amelia develops the instinctive sense that Garrett might, as he continually claims, be a victim, and that another unidentified killer might still be at large. In a moment of intuitive – and reckless – empathy, Amelia abandons her professional principles and escapes with Garrett, determined both to prove the boy’s innocence and rescue the remaining victim, a local history student named Mary Beth McConnell. From this point forward, almost nothing that happens in The Empty Chair is even remotely predictable.

It would spoil too many of the carefully constructed surprises to reveal the plot in any more detail. Suffice it to say that the narrative – which seems, at first, a simple but effective chase story – broadens and deepens to become something stranger and infinitely more complex. Throwing a varied assortment of people and elements into the mix – a trio of Deliverance-style rednecks, an emotionally scarred cancer survivor, a revisionist account of the Lost Colony of Roanoke, an apparently deranged deputy sheriff, a pair of incipient rapists, the hidden motivations of a wealthy industrialist, and the tragic history of Tanner’s Corner, a “town without children” – Deaver constructs an artful, entertaining melodrama that has much to say about the destructive consequences of uncontrolled greed.

If The Empty Chair has a besetting weakness, it is Deaver’s relentless determination to dazzle the reader with his narrative sleight of hand, piling on an endless, constantly escalating series of shocks, surprises, and unexpected twists that might, in a lesser writer’s hands, have become just a bit too much. But Deaver, as usual, is a consummate professional, and he holds it all together with the ease and assurance of a natural storyteller. Readers familiar with the earlier adventures of Lincoln Rhyme will be lining up for this one, which seems likely to attract a substantial number of new readers, as well. The Empty Chair is Jeffery Deaver at his best and most devious and is recommended, without reservation, to anyone in search of intelligent, high-adrenaline entertainment.