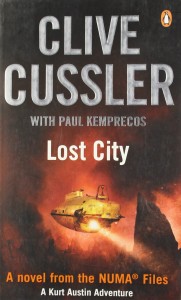 In the last few years, Cussler’s NUMA(r) Files novels, written with Paul Kemprecos, have only grown more popular-and more eagerly anticipated. “Cussler’s multitude of fans arrive at the table expecting a roiling stew of seafaring adventure, exotic travel destinations, cutting-edge science [and] a splash of romance. In White Death, they will find their expectations extravagantly fulfilled” (Publishers Weekly). And they will find them fulfilled again in Lost City. An enzyme that will dramatically prolong life has been discovered two thousand feet down in the North Atlantic, in an area known as “Lost City.”

But why are the people attempting to harvest it getting killed? Why are the scientists in a remote Greek laboratory disappearing one by one? What does this all have to do with a body found frozen in the ice high up in the Alps? To Kurt Austin, leader of NUMA’s Special Assignments Team, and his colleague Joe Zavala, it’s clear they have their work cut out for them, but it may be even bigger than they think-in fact, it may be their greatest challenge of all. . . .

Rich with all the hair-raising action and endless imagination that have become Cussler’s hallmarks, Lost City is an exceptional thriller.