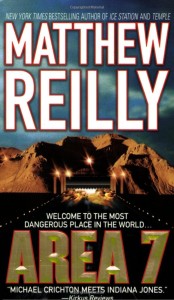 Book Number 2 in the Scarecrow Series.

From the bestselling author of Ice Station, another dizzyingly fast-paced adventure thriller featuring Shane Schofield. It is America’s most secret base, hidden deep in the Utah desert, an Air Force installation known only as Area 7. And today it has a visitor: the President of the United States. He has come to inspect Area 7, to examine its secrets for himself. But he’s going to get more than he bargained for on this trip. Because hostile forces are waiting inside… Among the President’s helicopter crew, however, is a young Marine.

He is quiet, enigmatic, and he hides his eyes behind a pair of silver sunglasses. His name is Schofield. Call-sign: Scarecrow. Rumour has it, he’s a good man in a storm. Judging by what the President has just walked into, he’d better be…