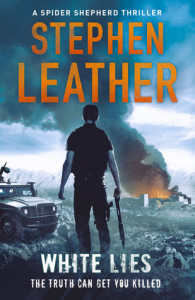 Raj Chaudry, a British-born Pakistani working for MI6, is seized and tortured by al-Qaeda extremists in Pakistan. It’s a blast from the past for Shepherd, since he previously trained Chaudry as an undercover agent in a terrorist case where both narrowly escaped with their lives.

Determined to save his former-apprentice, Shepherd embarks on a rescue mission with SAS and Pakistani Special Forces soldiers. But when the time comes, the assignment goes catastrophically wrong and Shepherd is captured. It’s almost as if someone had set a trap.

Shepherd’s MI5 controller Charlotte Button is furious at MI6′s management of the operation and is determined to remove Shepherd from harm’s way. But the Pakistani government forbids US intervention – and the only way Button can save Shepherd’s life is to break the rules. Enlisting the help of familiar face Lex Harper to track down Shepherd before it’s too late, Button soon discovers that one of the captives is a lot closer to home than she thinks . . .