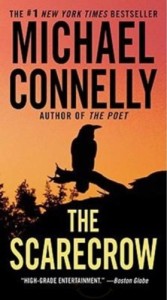 Jack McEvoy is at the end of the line as a crime reporter. Forced to take a buy-out from the LA Times as the newspaper grapples with dwindling readership and revenues, he’s got 30 days left on the job. His last assignment? Training his replacement, a low cost reporter just out of J-school who couldn’t find the police station if it was right next store to the Times, which it is. But Jack has other plans for his exit. He is going to go out with a bang – a final story that will win the newspaper journalism’s highest honor – a Pulitzer prize. Jack focuses on Alonzo Winslow, a 16-year-old drug dealer from the projects who has confessed to police that he brutally raped and strangled one of his crack clients.

Jack convinces Alonzo’s mother to cooperate with his investigation into the possibility of her son’s innocence. But she has fallen for the oldest reporter’s trick in the book. Jack’s real intention is to use his access to report and write a story that explains how societal dysfunction and neglect created a 16-year-old killer.But as Jack delves into the story he soon realizes that Alonzo’s so-called confession is bogus, and Jack is soon off and running on the biggest story he’s had since The Poet crossed his path twelve years before. This time Jack is onto a killer who has worked completely below police and FBI radar.

His investigation leads him into the digital world of data collocation services where server farms are watched over by techs who liken themselves to scarecrows – keeping the birds of prey off their clients’ data. But Jack inadvertently set off a digital tripwire and the killer – the Scarecrow – knows he’s coming.