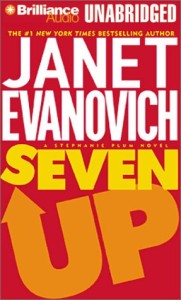 The smash hit No. 1 bestselling author takes you on the ride of your life in the seventh Stephanie Plum adventure. Stephanie thinks she’s going after an easy FTA: a senior citizen charged with smuggling contraband cigarettes. But when she and Lula show up at his house, they get more than they bargained for – a corpse in the woodshed and an old man on the lam. Stephanie’s mind is on other matters, however, because she has two proposals to consider: vice cop Joe Morelli is proposing marriage, and fellow bounty hunter Ranger is proposing a single perfect night…

This book is in the following genres: Action, Crime, Humor, Mystery, Romance, Suspense