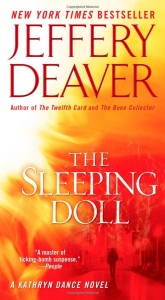 Daniel Pell is a contemporary Charles Manson. A petty criminal with a history of antisocial behavior and obsession with controlling other people, he had a group of women living with him in a quasi cult in central California. Eight years ago, he and another man viciously slaughtered a family for no apparent reason, though the three women in his “Family” were absolved of any part in the deaths. Now, present day, Pell has escaped and Kathryn Dance, the famed interrogator and kinesic analyst (body language) and her team, must find out where he is and why he’s staying near the prison he escaped from.

She brings together the three women, now leading normal lives, to help her find out where Pell is and what he’s up to. Pell, for his part, and a young woman he has manipulated to help him, tries to outguess the police and fulfill his mission, as he learns that Kathryn Dance is perhaps his most dangerous opponent. This is a typical cat and mouse Deaver novel, in which conflicts abound – finding the killer, as well as reconciling the emotions within Pell’s three ‘Family’ members, which have simmered over the years. The ‘Sleeping Doll’ refers to the one surviving daughter of the original murder