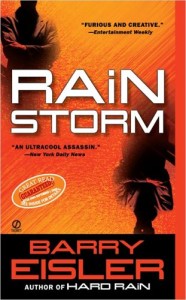 Critics praised Barry Eisler’s first two novels, Rain Fall and Hard Rain, calling Japanese-American John Rain, the cynical, romantic, conscientious assassin, “one of the most memorable characters in recent thrillers” (San Jose Mercury News) and “a remarkable creation, a multifaceted killer with the soul of a poet” (Mystery Ink). In Rain Storm, Rain has fled to Brazil to escape the killing business and the enemies who have been encircling him. But his knack for making death seem to have been of “natural causes” and his ability to operate unnoticed in Asia continue to create unwelcome demand for his services. His old employer, the CIA, persuades him to take on a high-risk assignment: a ruthless arms dealer supplying criminal groups throughout Southeast Asia.

The upside? Financial, of course, along with the continued chimera of moral redemption. But first, Rain must survive the downside: a second assassin homing in on the target; the target’s consort-an alluring woman named Delilah with an agenda of her own; and the possibility that the entire mission is nothing but an elaborate setup. From the gorgeous beaches of Rio to the glitzy casinos of Macao to the gritty back streets of Hong Kong and Kowloon, Rain becomes a reluctant player in an international game far deadlier and more insidious than he has ever encountered before.