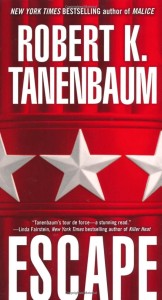 In a riveting trial of garish courtroom confrontations, newly elected New York District Attorney Karp battles the “insanity of the insanity defense,” as he tries to make Jessica Campbell, a rabble-rousing political science professor at NYU, pay for the murder of her three children. While Campbell claims that God told her to “send her three children to Him,” it is up to Karp to prove that she was fully aware of the nature and consequences of her actions. Meanwhile, an Islamic terrorist, The Sheik, and his homegrown suicidal “jihadis” hatch a plan, a spectacular outrage to occur in Manhattan’s heartland, that if successful could destroy the economy of the United States and the world.

Standing between the terrorist Sheik and his diabolical scheme are Butch’s wife, Marlene Ciampi, a private detective focused on protecting women from abusers; the couple’s daughter, Lucy, who has joined a secretive anti-terrorist organization; and a wonderfully eccentric–but effective–group of crime fighters as has ever graced the pages of a book.