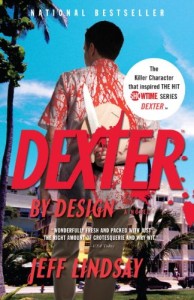 Book Number 4 in the Dexter Series.

Being a blood spatter analyst who hates the sight of blood has always made Dexter’s work for the Miami PD tough. But it means he’s very neat when it comes to his out-of-hours hobby: murder. Of course, the fact Dexter only kills bad people helps too. Now Dex is facing a disturbing situation. He’s used to blood at work, and blood when he’s out with the dark passenger (the voice that guides him on his deadly outings). But he’s not sure what to make of the man who says blood is art. Using bodies as his canvas, someone is out there expressing themselves in the most lethal and painful of ways.

If Dexter’s to escape the scalpel and avoid becoming the latest exhibit, he needs somewhere to run…and he might just have found the perfect place. With his wedding looming, completing his nice-guy disguise, Dexter’s honeymoon might just save his skin. From the most original voice in crime fiction, DEXTER BY DESIGN is an enthralling, macabre and gruesomely entertaining thriller.