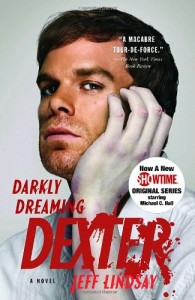 Book Number 1 in the Dexter Series.

Meet Dexter Morgan. He’s a highly respected lab technician specializing in blood spatter for the Miami Dade Police Department. He’s a handsome, though reluctant, ladies’ man. He’s polite, says all the right things, and rarely calls attention to himself. He’s also a sociopathic serial killer whose “Dark Passenger” drives him to commit the occasional dismemberment. Mind you, Dexter’s the good guy in this story.

Adopted at the age of four after an unnamed tragedy left him orphaned, Dexter’s learned, with help from his pragmatic policeman father, to channel his “gift,” killing only those who deal in death themselves. But when a new serial killer starts working in Miami, staging elaborately grisly scenes that are, to Dexter, an obvious attempt at communication from one monster to another, the eponymous protagonist finds himself at a loss.

Should he help his policewoman sister Deborah earn a promotion to the Homicide desk by finding the fiend? Or should he locate this new killer himself, so he can express his admiration for the other’s “art?” Or is it possible that psycho Dexter himself, admittedly not the most balanced of fellows, is finally going completely insane and committing these messy crimes himself?